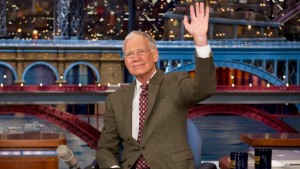 On April 3, 2014 David Letterman announced on The Late Show that he was going to retire on May 20, 2015. Letterman made the announcement in a rather nonchalant manner (I don’t think bandleader Paul Shaffer knew about it) – no jaws dropped and there wasn’t a collective gasp from the audience. Maybe people thought it was a joke or maybe they weren’t processing the news at the time or maybe the end date was so far away that it felt like it would never come. Well, now that over a year has passed, that looming date is almost here and, in just two weeks, Letterman’s rein as the longest-serving late night talk show in TV history will come to an end after 33 years.

Although I’m not the biggest Letterman fan, as someone who pays attention to pop culture, this is a milestone that cannot be ignored. He is among the most nominated people in Emmy Award history with 52 nominations, winning two Daytime Emmys and five Primetime Emmys. His nomination record is second only to producer Jac Venza (directly responsible for most of the theatre and music programs that have been seen on PBS since its creation in 1970) who holds the record for the most Emmy nominations for an individual. Letterman won four American Comedy Awards and in 2011 became the first recipient of the Johnny Carson Award for Comedic Excellence at The Comedy Awards. He was also a recipient of the 2012 Kennedy Center Honors, where he was called “one of the most influential personalities in the history of television.”

While Letterman’s popularity is undeniable, he is also no stranger to controversy. A lot has gone on during his three-decade rein including his month-long heart surgery hiatus in 2000, the 2007-2008 writers’ strike which resulted in The Late Show going off the air for eight weeks, feuds with people like Oprah Winfrey and Sarah Palin, among others, and the list goes on and on. He’s also had some memorable pop culture moments –both positive and negative – such as:

-Bill Murray literally ran out on his interview to jog around New York City to show off his marathon training regimen.

-The inexplicable interview with Joaquin Phoenix in 2009 where he acted like a derelict nutjob even though later it was revealed to be a big joke.

-Drew Barrymore jumped on Letterman’s desk and flashed him for his birthday in 1995.

-A cigar-smoking Madonna gave Letterman an incredibly hard time in a 1994 interview and bascially called him a sell-out asshole.

Known for being a tough, smartass interviewer who is unimpressed with celebrities and all that comes with fame, Letterman sometimes comes off as a hater. He almost acts like the audience and his guests should thank their lucky stars for being in his presence. And then other times he makes brilliant comments, challenges celebrities who are used to having their asses kissed and asks the tough questions. As a journalist, I can appreciate that. Most importantly, he brings some of the best music talent in history to television.

Some of the music highlights:

-Even though I’m not an R.E.M. fan, I do think it’s very cool that the band made their television debut on The Late Show in 1983.

-In 1993 Bruce Springsteen was the last guest to play The Late Show when Letterman made the decision to leave NBC and move to CBS. In true Springsteen form, the set went into overtime and delayed the evening news.

-One of the most moving performances on the show was in 2002 when frequent guest and occasional substitute band leader Warren Zevon, who was dying of cancer, played his final public performance on The Late Show. He was the only guest for the full hour.

-The Foo Fighters performed a week-long residency on the show in 2014 – I clearly recorded every episode and enjoyed watching Dave and Dave talk about anything and everything.

As we all know time moves on and after Letterman’s departure on May 20, fan favorite Stephen Colbert, who hosted Comedy Central’s The Colbert Report for 10 years, will take Letterman’s place as the host of The Late Show. My prediction is that like Fallon has seamlessly and successfully taken over for Jay Leno on The Tonight Show, Colbert will do an excellent job.

Congratulations on your retirement Mr. Letterman – you’ve earned it.