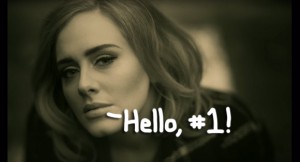 On October 21, 2015 I wrote about the excitement surrounding Adele’s new song and return to music after four years of silence. I talked about the strength of her single “Hello,” the fact that she has the biggest voice of my generation, and how she’s already had a record-breaking career before the age of 30.

Well, Adele has officially set the bar even higher: “Hello” sold 1.11 million digital copies in its debut week in the United States making it the first single ever to score over 1 million downloads in the first week of release. Let’s take a moment to understand what a huge deal this is for her. Selling over 1 million of anything is an accomplishment, but 1 million downloads in seven days was, before this song, literally unheard of in the music industry. In fact, the previous record was held by Flo Rida whose 2009 ubiquitous hit “Right Round” earned 636,000 downloads.

Clearly Adele hasn’t lost her touch because not only did those numbers push “Hello” to a Number One debut on the Billboard Hot 100, they also gave Adele her fourth chart-topping song. Here’s another interesting stat: On Billboard’s Streaming Songs chart – which tracks U.S. streams over a variety of different mediums including YouTube –“Hello” boasted 61 million streams in one week. What’s a more appropriate word than WOW?!

Get ready for the November 20 release of 25 – if the rest of the record is as impressive as “Hello” Adele is going to have to make some more room on her Grammy shelf.