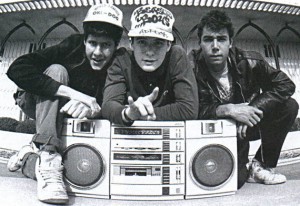 Even in Mexico I could feel the loss of Beastie Boys founding member Adam Yauch (MCA). Facebook was inundated with status updates, YouTube videos and shout outs to one of the most celebrated hip hop groups in music history.

Formed as a hardcore punk band in 1979 by Yauch and Michael Diamond (Mike D), the group transitioned to hip hop in 1984 and released a string of successful 12″ singles. The Beastie Boys (including Adam Horovitz aka Ad-Rock) toured with Madonna in 1985 and a year later released their debut album Licensed to Ill. The group sold 22 million albums in the United States and 40 million albums worldwide, making them, according to Billboard, “the biggest-selling rap group” since 1991.

Take a look at the song list for Licensed to Ill because it might as well be an early Beasties Greatest Hits disc: “Girls,” “(You Gotta) Fight for Your Right (To Party),” “No Sleep Till Brooklyn,” “Paul Revere” and “Brass Monkey.” That’s one hell of a debut album.

Over the course of their career, the group was nominated for 10 Grammys and won three for Best Rap Performance by a Duo or Group for “Intergalactic,” Best Alternative Performance for 1998’s Hello Nasty and Best Pop Instrumental Album for 2007’s The Mix-Up.

In addition to their music, the Beastie Boys became known for their creative and funny music videos – especially the video for “Sabotage.” Back in the early days when music videos mattered, the group was nominated for eight MTV Video Music Awards and won three. But regardless of all the awards and high praise, what’s important is the influence of the Beasties. For anyone under 50 years old it’s hard to deny that the Beastie Boys were, at least at some point, part of their soundtrack.

Beasties music was something different. It jumped across so many genres and music tastes – rock and roll, punk, hip hop, rap, etc – and brought people who liked Zeppelin, Run D.M.C., the Clash (and everything in between) together. The Beastie Boys were influenced by so many different bands and artists and somehow they pulled it all together and made their own sound. And, most importantly, they aged well. As they got older their music changed and they adapted rather than trying to be punk kids from Brooklyn well into their 40s. Instead, the Volkswagen chains and high top sneakers evolved into suits and creative costumes. And they were still cool.

Hello Nasty pretty much provided the soundtrack for a backpacking trip I took with about 15 other kids throughout Colorado and then carried over into my freshman year of high school. Several years later I was supposed to fly to Miami to celebrate my 21st birthday but I never made it because a hurricane tore through town. Instead, I stayed in Colorado and got to see the Beastie Boys at Red Rocks – a show I’ll never forget. Quite the twist of fate considering I’d never see them again and now with the tragic death of MCA no one else will.

In 2009, Yauch was diagnosed and treated for a cancerous parotid gland and a lymph node and underwent surgery and radiation therapy. Yauch died at age 47 on May 4, 2012.

Upon his death, Russell Simmons of Def Jam Records said that Yauch “was incredibly sweet and the most sensitive artist, who I loved dearly.” Ben Stiller tweeted that Yauch “stood for integrity as an artist.” Joel Madden of Good Charlotte said of the Beastie Boys, “We wanted to dress like them, talk like them, and we wanted to make music like them.” Jeff Ament of Pearl Jam said that Yauch was “a crazy talent whose contributions with his band were inspirational and consistently ground breaking.”

Fortunately, Yauch did get to see his group receive one of the highest honors in music as the Beastie Boys were inducted into the Rock and Roll Hall of Fame less than a month ago. They were the third rap group to enter the Hall after Run-D.M.C. (2009) and Grandmaster Flash and the Furious Five (2007).