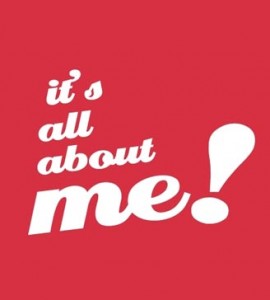 I’ve had plenty of discussions with people on the difference between arrogance and confidence and usually the general consensus is a) there is a fine line between the two terms and b) confidence is much more widely accepted than arrogance.  That being said, when it comes to the entertainment world, having an ego might help you create your very own wildly popular television show that stars you playing you.

From what I’ve seen, it’s mostly male actors who create television shows where the lead character is loosely based on themselves.  Some of these shows are great while others are annoying but nevertheless, they all are or were very popular:

Two and a Half Men:  I will start with this one only because it is clear that Charlie Sheen has taken over the world.  I think this show sucks and I cannot believe that (until recently) it was one of the highest-rated shows on TV featuring TV’s highest-paid actor.   To see what all the fuss was about I turned on a few episodes a few months before Sheen Madness began and although there were a few funny lines the dialogue and storylines were predictable and the sight of Sheen in bowling shirts made we want to never bowl again.  As I’m sure everyone knows now, Men was about two brothers and the son/nephew they take care of together.  Not only was Sheen’s character named “Charlie” but with all of his womanizing and drinking he played a very PG version of himself in the show.  I’m assuming that the fact that Sheen was basically playing himself attracted viewers back when Sheen was considered charismatic and fun – now, not so much.

Seinfeld:  The show notoriously described as “the show about nothing” still has a following to this day.  Jerry Seinfeld (as himself) and his buddies were a crazy foursome that America could not get enough of for over a decade. I believe that the show depicted Seinfeld as who he really is (the shows usually ended with him doing a stand-up routine) and that the rest of the gang were happy to join in the fun. People refer to Seinfeld lines and episodes all the time and although the show went off the air in the late nineties, it lives on through reruns and people constantly quoting Jerry, Kramer, George and Elaine.

Everybody Loves Raymond:  I was never a fan of this show and the few episodes I saw were not only boring but were designed like every other family sitcom ever created.  Like Jerry Seinfeld, Ray Romano played himself and I’m sure pulled episode material from his stand-up routines.  Except this time he had a whole family acting with him.  Either way, this show, like Men and Seinfeld, was extremely well-liked and won a bunch of Emmys over the years.  Why?  I couldn’t tell you.

Californication:  I can’t say enough good things about this show –it’s so clever, well-written, well-acted and David Duchovny is brilliant as writer/alcoholic/womanizer Hank Moody.  He is charismatic, funny, too smart for his own good, unapologetic for being exactly who he is and he totally gets away with it.  Everyone wants to be Hank even though they are constantly rolling their eyes at him.  He is a walking contradiction as he has no edit function, drinks and does drugs, is a father to a terrific daughter, has an undeniable love for music and can’t resist women but is so talented that he can’t help but be successful.  In On 2008, it became public knowledge that Duchovny (like Moody) had trouble resisting women and checked himself into a rehabilitation facility for treating sex addiction.  Coincidence?  I don’t think so.

Rescue Me: Denis Leary is clearly not a fire fighter but there is no question that he is as biting, sarcastic and mouthy as his alter ego Tommy Gavin.  Have you ever seen Leary do stand-up? Have you heard his song entitled “I’m An Asshole” or watched him being interviewed on a late night show?  He is hilarious – a fast talker who is funny and, most importantly, a great storyteller.  On Rescue Me the Gavin family is a big part of the storyline and Leary definitely pulls from his real-life family for these characters – including their names.  His character also tells stories on the show that actually happened to Leary throughout his childhood.  One of the best shows on TV with one of the most complex and ballsy characters ever, Leary gets it done.  I will be sad to see this one go after its upcoming final season.

The reason these shows work is because these guys are good actors – even if they are playing version of themselves.  While there are clearly some I prefer more than others, all of these shows have earned critical acclaim.  Turns out, writing what you know is an expression for a reason.