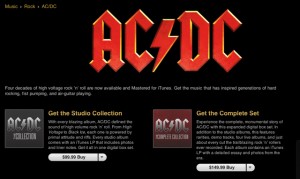 On November 8 I wrote about longtime iTunes holdout Kid Rock finally releasing his music to the most successful “record store” in the world. Less than two weeks later another longtime holdout, AC/DC, just announced that they are also releasing their music to iTunes – 16 studio albums including High Voltage and Back in Black.

So what the hell is going on? Why all of the sudden is everyone wanting to release their music to iTunes after so many years of resistance? Slumping CD sales is nothing new ever since digital music became part of our lives and everyone knows that touring is where music acts make their money. So what’s the deal? I can’t believe that it’s a coincidence that two of rock and roll’s most notorious iTunes haters both decided to cave within a 14-day period.

The only logical reason I can think of is that both Kid Rock and AC/DC have new albums to promote and they needed some help. Both albums debuted yesterday. Rock’s new album is called Rebel Soul and AC/DC released Live at River Platte which is the band’s first live disc in two decades. Recorded in Buenos Aires in December 2009 in front of nearly 200,000 fans, it chronicles one of the largest rock shows in history.

Now that Rock and AC/DC have joined the Beatles, Led Zeppelin and Metallica as late arrivals to the iTunes party it’s only a matter of time before Garth Brooks and Tool follow in their footsteps. The only question will be how soon.