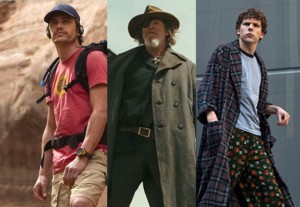 It’s award season again and you know what that means: Wins!  Losses! Dresses! Scandals! Speeches! Snubs! Surprises!  The Golden Globes kicked off Hollywood’s favorite season with some exciting wins for both movies and television but today brought the announcement of the Holy Grail of all movie nominations:  The Oscars.

The Oscars are a big deal because, like Grammy nominations, even if you don’t win the fact that you were nominated puts you in a very elite category.  The actors and actresses who are billed as “Academy Award Nominee_____” are definitely noticed by both the public and the industry and if you actually win and are then billed as “Academy Award Winner _____,” that elite group gets even more elite.

On a less complicated note, everyone likes to win so when a director, actor, actress, musician or even a costume designer hears his or her name called it’s a game changer and maybe even a life changer.  So, whose night will it be on February 27?  The nominated movies I still need/want to see are True Grit, Inception and The King’s Speech (I know, I know I really need to see all three like yesterday) but until then I will put a star next to the people and movies I’m rooting for and why:

Actor in a Leading Role

*Jesse Eisenberg – The Social Network (At this point everyone has heard about this movie and it’s no accident.  Like Facebook, this movie has taken over the conversation because of its superior acting, writing and storyline.  I never wanted it to end.)

Actor in a Supporting Role

*Christian Bale – The Fighter (As drug addict/ex-boxer Dicky Eklund, Bale portrays a former local legend who has let life get the best of him.  He is an out of control train wreck who makes people either gawk or literally and figuratively look the other way.  As for the performance, I absolutely couldn’t look away.)

Mark Ruffalo – The Kids Are All Right

Actress in a Leading Role

Annette Bening – The Kids Are All Right

*Natalie Portman – Black Swan (I haven’t seen any of these movies but if the Golden Globes and the media are any indication Portman has it in the bag.)

Actress in a Supporting Role

(I’m torn for this one since both women were so hardcore and so vital to the success of The Fighter. Adams was brilliant as Micky Ward’s no-bullshit girlfriend and Leo was fantastic as Ward and Eklund’s no-bullshit mother.  Either choice is a good one and, since it’s such a tough call, who knows if Leo winning the Golden Globe will help or hurt her chances.)

(This is going to be a hard one for the people of the Academy since every single movie is so good.  Because I haven’t seen True Grit or The King’s Speech my choice will be The Social Network for its fast-paced storyline, layered characters and perfectly cast group of actors.)

The Kids Are All Right

(Ever since the Oscars decided there were going to be 10 choices for Best Picture instead of five choices this category has become impossible to predict.  Rather than choose I’ve only starred the movies I’ve seen because I literally have no idea how the powers that be are going to make this decision.)

How to Train Your Dragon – John Powell

*The Social Network -Trent Reznor and Atticus Ross (I have to go with my favorite Nine Inch Nails alum for this one.  His music was the perfect soundtrack to illuminate the contradictory themes in the movie – darkness and discovery.)

“If I Rise” from 127 Hours – Music by A.R. Rahman Lyric by Dido and Rollo Armstrong

*“We Belong Together” from Toy Story 3 – Music and Lyric by Randy Newman (I have a special place in my heart for Randy Newman and this movie.)