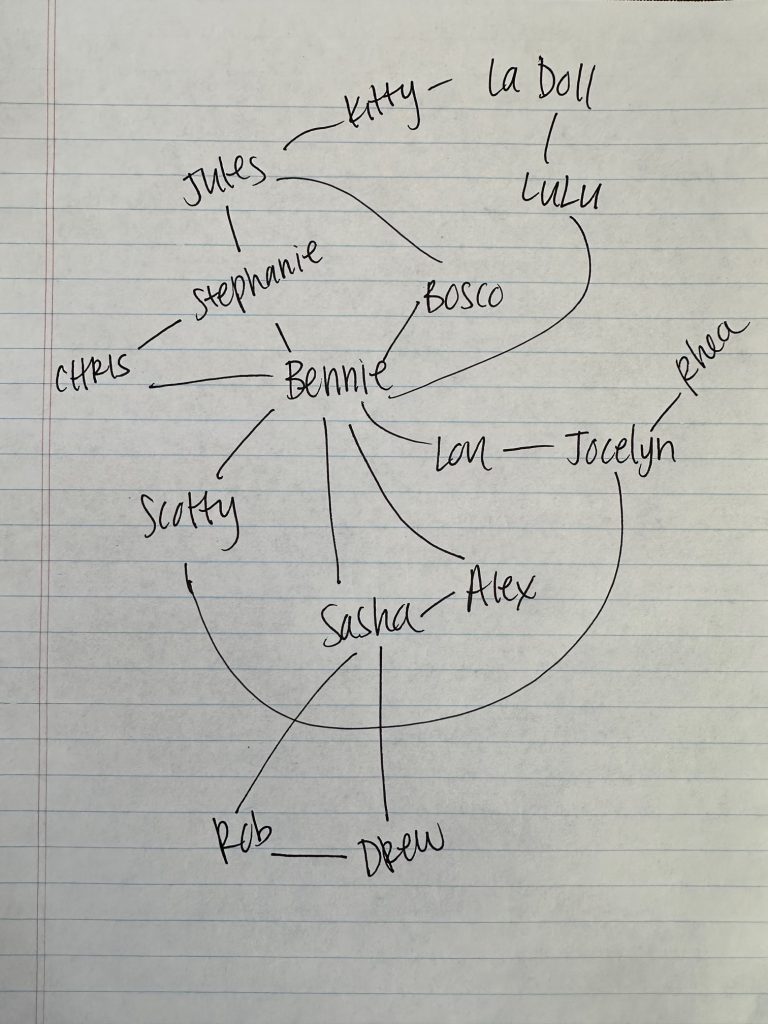 If ever there was a need for a Venn Diagram, A Visit From The Goon Squad is it. The chapter 12 PowerPoint presentation does a good job of mapping things out, but it only covers a portion of what goes on (more on that later). This book follows so many characters who weave in and out of each other’s lives I had to write my own schematic (if that’s even what it’s called?) to keep track and refer to as I read. Even though the narrative sort of comes full circle, there are countless twists, turns, and binding threads that referring back to earlier chapters while reading was necessary.

What’s interesting is that the book pretends to be about record company executive Bennie Salazar, who is the head of Sow’s Ear Records, but it’s not. The book also pretends to be about music – which it is and  isn’t at the same time. It’s also not about The Conduits – the fictional band that becomes a common thread – but the band does play an important role. Instead, the story is really about a woman named Sasha and her lasting effect on everyone she comes in contact with throughout the narrative.

While Goon Squad name-checks a variety of musicians (Iggy Pop to Biggie to Semisonic) and music magazines (Rolling Stone, Vibe and Spin), and touches on how important they used to be, it walks the line of romanticizing the music business and warning readers about the music business. And although there are artists, record producers, writers, and publicists abound, this story is really about the intertwining relationships between people of all different backgrounds and the rise and fall they endure. In fact, this book goes to some dark places – but also to some revelatory places: “Suicide is a weapon; that we all know. But what about an art?”

Spanning several decades, three different points of view (first, second, and third person), and over 20 important characters, Goon Squad is both the strangest book I’ve ever read and a brilliant masterpiece. I don’t know how Jennifer Egan came up with these people or kept track of them. There are so many negative personality traits, but the reader still finds reasons to root for them – all of which are fluid. These people present all kinds of issues including kleptomania, mental illness (in the form of an off-the-grid guitarist showing up to a music label office and acting so erratically it is unclear what he actually wants), rape, addiction, and the list goes on and on. Oh, and then there is the publicist who thinks it’s a good idea to take her daughter and a movie star to see her new client who happens to be a dictator responsible for genocide in his country. WHAT?! 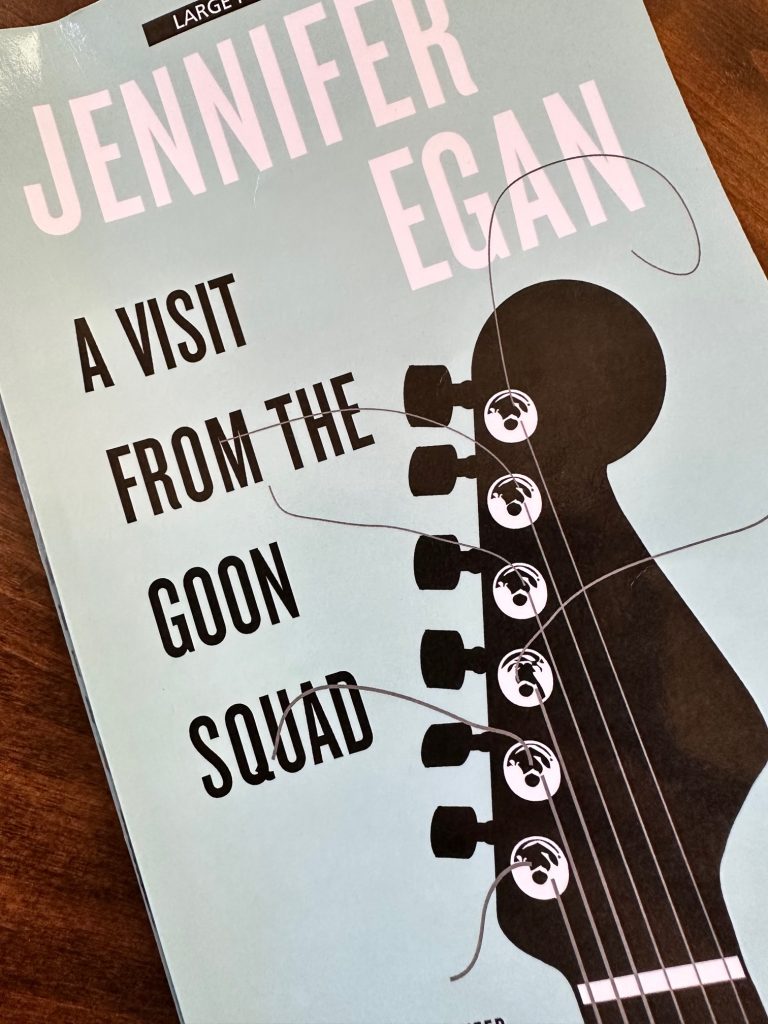 Chapter 12 is the big shift – literally and figuratively – as the reader must turn the book sideways to read the PowerPoint presentation created by Sasha’s daughter to explain (in some cases) and question (in others) her parents, herself, and her brother. Using diagrams and graphs, the presentation functions as both an outline and the most informative part of the entire book. It shouldn’t work, but it does, because it cleverly answers questions for the reader through a child’s observations of her family. Brilliant and odd at the same time, the loving method of explanation depicts how, simultaneously, people can change but that old habits die hard.

So is Goon Squad for music fans? I guess. I think it’s more for people who appreciate how small the world can be, how people’s lives intersect for a variety of reasons, and for people who can keep a cast of characters straight. Also, the book won the 2011 Pulitzer Prize for fiction and the 2010 National Book Critics Circle Award for fiction so there is clearly something to be said about that.

“they were writing a story of redemption, of fresh beginnings and second chances”

“I’ve been out of the game a long time, but I could spot a musician anywhere.”

“Only Bennie could appreciate the depth of self-delusion she was witnessing.”

“The city’s chief source of color seemed to be the laundry flapping on every balcony.”

“she was like anyone, with a life that worried and electrified and overwhelmed her”

“It was one of those days when every intersection brings up another familiar face, old friends and friends of friends, acquaintances, and people who just look familiar.”

“unleashing something strong, charismatic, and fierce”

“Doesn’t a myth belong to everyone?”