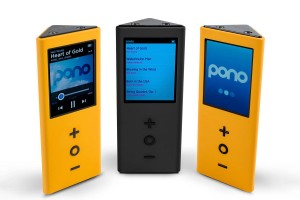 I’m constantly learning new information from watching The Tonight Show with Jimmy Fallon and last night was no exception. Special guest Neil Young came on the show to talk about Pono – his company that has created a portable digital media player and music download service designed for high-quality audio. In short it’s designed to allow music to sound like it should.

Called a PonoPlayer, the device looks like a triangle-shaped version of an iPod and is available in black and yellow and blue. It will set you back $399 and comes with 64 GB of internal storage along with an additional removable 64 GB MicroSD card. The cards can be swapped to allow for a larger selection of data and apparently the PonoPlayer can store 100 to 500 high-resolution digital music albums.

Young founded PonoMusic in 2012 and then appeared on the Late Show with David Letterman with a prototype and reported backing from major record labels Warner, Sony, and Universal, with a full agreement with Warner. Funding for the project began with a Kickstarter campaign that raised over six million dollars.

In true hippie dippy form, Young named the device after the Hawaiian word for “righteousness.” That being said, and his hippieness aside, Young may be on to something. Since digital music became the norm, there have been countless articles and discussions about how convenience has become more important than quality. As a result, records have “come back in style” as people yearn for the original sound of their music.  So in an effort to bring digital music to a point where the quality it similar to records, Young created Pono to present songs “as they first sound during studio recording sessions” using “high-resolution” 24-bit 192kHz audio instead of “the compressed audio inferiority that MP3s offer.” But Pono is not just about the gadgets – The PonoMusic online music store can be found at www.ponomusic.force.com where you can buy the devices and music.

Although it all looks impressive and of course I believe in the importance of sound quality, it will be hard for Young to compete with Apple. So many others have tried and failed before but then again there is a lot to be said about a rock and roll veteran like Young spearheading the cause as opposed to musicians protesting like they did in the early years of digital music. On a side note there is the question of whether or not people will buy yet another version of their favorite song.

Good luck to you Mr. Young! I hope Pono does well and changes the face of music is a positive way. If you can improve sound quality to the point where us music fans feel like we’re in the recording studio than who am I to argue. After all, “My my, hey hey rock and roll is here to stay…”