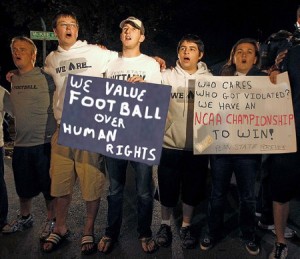 I’ve played sports my entire life and in addition to enjoying the competition and the camaraderie between teammates (a few of which are still some of my closest friends) I had some great coaches that really had an impact on my life. At 28 years old I believe I am successful in the working world as a result of a good education and because I played team sports.

When I was young I played softball for Coach Gabe – a man who taught me that discipline, practice and hard work leads to victory. In middle school Coach Wyler taught me that being in better shape than your opponent will make you a better player and will bring your team more wins. After my high school decided to finally replace the worst coach I ever had in my life, Coach Peluso stepped in when I was a junior and showed me that he knew what it took to create a winning volleyball team. Never giving us the same workout twice and always both supportive and helpful, Coach Peluso taught us how to excel individually and as a team. I will never forget my senior year of high school because he was one of the best coaches I ever had. Last but not least is Mosi Blake. Although he was never my official coach, he was a sports mentor for me during high school and ultimately became one of my closest friends.

So why is it that every time I get email updates from Sports Illustrated the headlines talk about another coach doing something horrible which then leads to suspension or termination? What the hell is going on? What happened to coaches being mentors who help kids and other adults?

Joe Paterno: As head coach of the Penn State Lions for nearly 46 years, Paterno held the record for the most victories by an NCAA Division I Football Bowl Subdivision football coach. He coached five undefeated teams that won major bowl games and, in 2007, was inducted into the College Football Hall of Fame as a coach. Despite his achievements as a coach, Paterno’s career ended abruptly in 2011 after he was fired for his “failure of leadership” in the child sex abuse scandal surrounding his former assistant coach Jerry Sandusky.

And by “failure of leadership” they mean that Paterno knew what was going on and didn’t say anything. I don’t care how many wins you have – if kids are getting abused and you know about it and don’t say anything you are just as bad the abuser.

Bobby Petrino: Last month Petrino was involved in a motorcycle crash and former Arkansas All-SEC volleyball player Jessica Dorrell, who he had hired on March 28, 2012 as the student-athlete development coordinator, was riding with him. Petrino initially said he was alone but then on April 6, just minutes before a police report was to be released showing Dorrell was also aboard, Petrino revealed that Dorrell was not only a passenger, but that he had an inappropriate relationship with her. Athletic director Jeff Long placed Petrino on an indefinite paid leave of absence while he reviewed the situation. Yesterday Long announced that Petrino had been fired.

During Long’s investigation, it was discovered that Petrino made a previously undisclosed $20,000 cash gift to Dorrell. It was also revealed that Dorrell may have received preferential treatment in her hiring to the football staff, as Petrino’s relationship with Dorrell was not disclosed and Petrino was on the hiring committee. Long determined that Petrino’s attempts to mislead both him and the public about the accident and his relationship with Dorrell were grounds to fire Petrino for cause.

Sean Payton: As a result of Payton’s involvement in the New Orleans Saints bounty scandal, under which “bounties” were paid for interceptions, forced fumbles and contact that would knock out targeted players on opposing teams, he was suspended for the entire 2012 NFL season. Originally set to take effect April 1, 2012, Payton filed an appeal of his suspension with the league the Friday before it was set to take effect. On April 9, NFL Commissioner Roger Goodell denied his appeal and his suspension will now take effect on April 16.

These men are a disgrace to sports and their behavior will ultimately lead to more bureaucratic bullshit rules in the future. Come on guys! Instead of breaking the rules and letting your teams down do the job you were hired to do and do it well. You’re supposed to be shaping lives for the better – not ruining them.