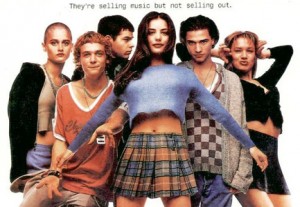 For some reason the 90s was a breeding ground for teen movies. They were everywhere! It was like the 80s Brat Pack except with more grunge and R ratings.

While I love 80s teen movies (Breakfast Club, Say Anything, Fast Times At Ridgemont High, Ferris Bueller’s Day Off, etc. I could go on and on…) 90s teen movies hit closer to home for me since they were released when I was a teen. And now that I’m almost 29-years-old I think a lot of those movies still hold up and are still funny. And they also have killer soundtracks because in the 90s that actually mattered. Here are my top five favorites and the reasons why I think they continue to stand the test of time:

Empire Records – It’s no surprise that I still love a movie about kids working at a record store because a) I dig music and b) I was that kid. But Empire Records is so quotable and so fun and so full of quality actors. How great was it when Warren gets busted for buying CDs that were “rap, metal, rap, metal and Whitney Houston?” Don’t tell me you don’t remember the “Sinead O’Rebellion” line! How about Renee Zellwegger’s Gina freaking out over Cory’s (Liv Tyler) perfection and then singing “Sugar High” with Coyote Shivers on the roof of the record store? Yeah, it doesn’t get better than that.

Clueless – Before this movie Alicia Silverstone was famous for starring in Aerosmith videos with her buddy Liv Tyler. Post-Clueless she became Cher Horowitz for life. Not because she dressed well, had a remote-controlled closet and a cell phone when no else did, but because she made being a rich snobby Beverly Hills princess likable and funny. There are also stealthily tossed in adult comedic one-liners throughout the movie. One of my favorite gems: “My plastic surgeon doesn’t want me doing any activity where balls fly at my nose. Well, there goes your social life.” And who could forget Travis Birkenstock’s (Breckin Meyer) tardiness speech? Classic.

Can’t Hardly Wait –While I think Jennifer Love Hewitt is one of the worst actresses ever she does a good job of playing the popular girl who is all hair and no personality. She is also joined by a group of actors who play their teen stereotypes very well. My favorite is Seth Green as “Special K” who gives speeches like: “92 percent of the women at UCLA are walking around going, ‘Class or sex? What shall I do?’ I roll up on that shorty be like, ‘What’s up yo?’ she be like, ‘You don’t know 20 different ways to make me call you Big Poppa’ cuz I don’t yo.” I also love watching the nerdy kid sing “Paradise City” even though the actual band who is supposed to perform at the party never plays a single song.

Varsity Blues – A football movie starring a post-Dawson’s Creek James Van Der Beek that takes place in Texas? Why not! This movie is probably best known for the whip-cream scene and the “Hot For Teacher” strip club scene and while those parts of the movie are hysterical, what I like about this movie is that there is more going on than high school dances and popularity contests. What gives this movie teeth is the fact that it features a racist nutjob coach played brilliantly by Jon Voight who throws chairs at players and encourages them to shoot up if it gets the points on the board and some seriously unhinged parents who put football before everything else.

American Pie – This movie bleeds 90s. Examples: The flannel shirts, Tara Reid actually looks like human being, the kid from Rookie of the Year is a grownup, a webcam is the new cool thing and Blink 182 makes a cameo! Like Varsity Blues, this movie has its “classic” scenes like the pie incident, the naked dancing that the whole school sees over the Internet and the Casey Affleck call-in cameo with that ridiculously large cell phone. American Pie is as funny as it is shocking and although it has its disgusting moments there is so much about this movie that is so high school. And the homage to The Graduate with Stifler’s Mom (Jennifer Coolidge) is something no one is forgetting anytime soon.

Once we crossed over into the “new millennium” (haha such a 90s term) the teen movies kind of faded away. Will there be a resurgence? I guess we’ll have to wait and see.