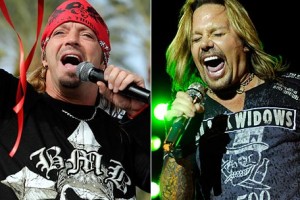 As far as I’m concerned there is no better time of year than summer in Colorado. Everyone is out and about playing volleyball at Wash Park, riding bikes, drinking on patios, running with their pups (especially with my little Sedona) and best of all its concert season!

Summer 2012 is going to be epic because some of my favorite 80s metal bands are headed Rock Mountain way!

My summer concert schedule so far:

I saw Van Halen in 2008 and they blew the roof off the Pepsi Center! This time around things are going to be different because Van Halen has a new album and it’s good. Really good. If the set lists they played so far this year is any indication this show is going to feature a great mix of the old stuff I love and the new songs that have become instant classics such as “She’s the Woman,” “The Trouble with Never,” and “Stay Frosty.”

The summer after I graduated from college I saw Def Leppard (with Journey) and they put on a great show. Clearly I can’t hear “Hysteria,” “Foolin’” or “Photograph” enough times so I’m looking forward to seeing them again but the real reason I bought these tickets is to see Poison for the first time! When the band was here a few years ago I had to give my tickets away so I’m glad to be getting a second chance. It’s time for some cowboy hat-wearing Bret Michaels and some guitar shredding C.C. DeVille!

To round out my trio of rock & roll awesomeness is what I consider the grand finale of summer 2012 – KISS and Motley Crue! Two bands I’ve never seen but always wanted to see! I can’t even imagine what those stages are going to be like! Between the pyrotechnics, makeup and this-one-goes-to-11 guitars I expect this show to be over the top in the best way possible. Good thing the venue is an outdoor amphitheatre because it’s gonna get loud!

Bring on the 80s metal and the summer of rock & roll! I’m ready!