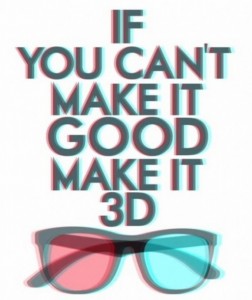 It’s no secret that since Avatar hit the theatres and became the biggest movie ever made by the biggest director on the planet, 3D made a big comeback. Gone are the ghetto paper glasses with blue and red tints and cheesy graphics – these days the glasses are the real deal and so are the special effects. Also, Hollywood somehow decided that if Avatar made zillions of dollars as a 3D masterpiece then every subsequent “action” movie needed to be in the same digitally-enhanced format.

Movies such as Clash of the Titans starring Avatar guy Sam Worthington, Monsters vs. Aliens and Journey to the Center of the Earth all came out in 3D like bats out of hell. Needless to say things got a bit out of control as every movie and its mother was either being made in 3D or worse – in some instances the movie powers that be were going back and adding 3D to a movie that wasn’t originally shot that way.

I can’t say I was surprised when 3D became the go-to move for Hollywood but I think it’s safe to say that the movies that work in that kind of enhanced format are also those that rely heavily on green screen and lots of explosions. But now there are two movies that are making a comeback – both from the 90s and both in 3D.

Disney’s 1991 Oscar-nominated Beauty and the Beast is coming back in 3D and so is a little movie about a big boat disaster – 1997’s Titanic. As we all already know, the latter is a James Cameron film and was the biggest movie ever until Cameron topped himself with Avatar.

So the question is this: How will these movies fare in an enhanced format? Beauty and the Beast is still the only animated feature to be nominated for an Oscar for Best Picture but it’s also a hand drawn animated feature from 1990. Will it work or is this just a ploy to get the movie back in theatres and suck money out of the movie-going public?

For the record I think it can be fun when old movies are brought to the theater – remember Grease circa 2010? (See my June 22, 2010 post). But sometimes I feel like I’m being scammed because going to a theatre and paying to see a movie that is shown on TBS on a regular basis and/or is something I already own on DVD is borderline ridiculous. That being said there’s nothing like the big screen.

Moving on. Titanic could be cool in 3D – seeing the enormous boat in a new format could bring back the star of 1997. But it could also be really lame and a waste of money and time. We’ll see how it goes. I guess it will depend on how well the 3D is done in both movies and how much people want to see these two classics. And they are both classics – very different from each other but classics nonetheless.

See you in the theatre? Let me know if you end up going.