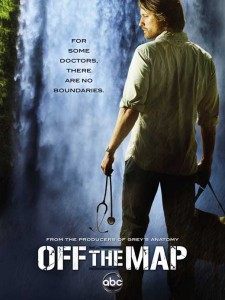 Shonda Grey’s Anatomy/Private Practice Rhimes has done it again.  She has managed to create another show about hot doctors saving lives while trying to keep their emotional baggage at bay – but this time they don’t work in an expensive Seattle hospital or at a wellness center by the beach.  Instead, these doctors are “somewhere in South America” and are doing a Doctors Without Borders thing in an effort to run away from their problems.

Here’s the deal so far…

There are the newbies:

-Dr. Lily Brenner is the goody goody who lost her fiancée in a tragic car accident and has her eye on a fellow doctor from the minute she arrives in the jungle.

-Dr. Mina Manard (who is played by Meryl Streep’s daughter) is no-nonsense and is constantly looking for the best cases.  She accidently killed a kid in an E.R. she used to work for in the United States and is doing some “time” in the amazon to pay for her mistakes.

-Dr. Tommy Fuller is the screw up who is estranged from his family and got into plastics before going to the jungle.

-Dr. Ben Keeton is the resident hottie who occupies all kinds of cliché.  He looks like Sawyer from LOST, has a drinking problem, lost his wife and kid a few years ago and has many women who have their eye on him.  He keeps his wife on life support so her trust fund can bankroll the clinic – saying this guy has series issues is the understatement of the year.

-Dr. Otis Cole is a recovering addict who apparently was in so deep he can’t even take medication during dental procedures.  He and Dr. Zita Alvarez are “dating” and are both equally hard on the new doctors.

-Charlie is the very charismatic local kid who helps out at the clinic by translating for the doctors still learning Spanish.

-Dr. Ryan Clark is by far the most annoying person on the show – and happens to be dating Dr. Keeton.

I find it interesting that Rhimes uses some of the same actors she’s used on Grey’s on Off The Map.  Jason George (Dr. Cole) played Bailey’s love interest, while Valerie Cruz (Dr. Alvarez) played the wife of a patient who suffered a severe nail gun accident – a case that seriously hit home for Meredith.  There have also been several guest patients visiting the amazon that also played guest patients in Seattle.  Clearly, these actors love working with Rhimes – or it could be that ABC pays really well.

So far so good with this show even though it’s not reinventing any wheels just yet.  But what it is doing is keeping my interest by providing great acting that is taking place in an exotic locale that does not include polar bears or black smoke.  Since I’ve recently deleted Private Practice from DVR because I couldn’t take the never-ending depressing storylines, I’m hoping Off The Map continues to please.