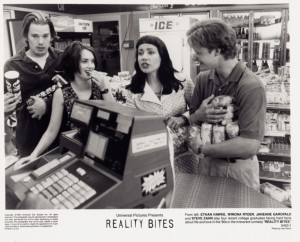 Ready to feel old? Reality Bites was released 20 years ago this week. Yeah – turns out the 90s were a long time ago.

Anyway….I wanted to write about this movie because when I was in middle school and high school I thought this movie was the truth. I thought slacker musician Troy (Ethan Hawke) was hot and Vickie (Janeane Garofalo) and Sammy (Steve Zahn) were clever and hilarious. Although I still think those three characters hold up to a certain degree, luckily, I was smart enough to realize that Winona Ryder’s character Lelaina was the most annoying person to ever be on screen.

An aspiring videographer working on a documentary called “Reality Bites” about the lives of her friends and roommates, Lelaina’s bug-eyed, flower-dress appearance and the way she sounded like she was chewing her face when she spoke endlessly frustrated me. Because she was the least interesting, I hated that she was the main character and I resented that her two love interests consisted of neurotic Michael Gates (Ben Stiller) and a chain-smoking singer who thought he was above everyone else and more “poetic.” I mean who else besides Troy could possibly define irony on a dime?

Even though the movie does discuss the challenges recent college grads face when entering the real world, it also leans heavily on the dialogue which is mostly pretty funny. Now that I’m older than the characters in this movie by almost a decade I realize that when you watch Reality Bites, you either have to take it with a grain of salt or roll your eyes. Troy going on and on about his existential bullshit is ridiculous and his rendition of Violent Femmes’ “Add It Up” is embarrassing but there are some exceptionally funny lines that support the movie – for example the scene when they are all smoking weed on the couch:

Vickie: Don’t Bogart that can, man…
Troy Dyer: Are you retarded?
Vickie: No, I’m rhyming. It’s not easy. Sure I make it look easy…

Or when Sammy and Vickie to a “pre-enactment” of what will happen when he tells his parents he’s gay:

Sammy: I have something to tell you, I am…a homo…homosexual.
Vickie: [beat] Oh, Christ.

You know what else put this movie on the map? The soundtrack! The Knack, Juliana Hatfield, Lisa Loeb, U2, Crowded House, Squeeze, Dinosaur Jr. and Lenny Kravitz?! Shut the front door! Also, when the characters sang “My Sharona” and “Tempted” it made you want to be them. Look at how much 90s fun they were having!

So I guess the bottom line is that Reality Bites is a great movie and will always have a place in my 90s-loving heart but it is definitely not any kind of road map for kids in their early 20s who are trying to figure out what’s next. If you want to learn about that watch Jerry Maguire. I’m kidding…