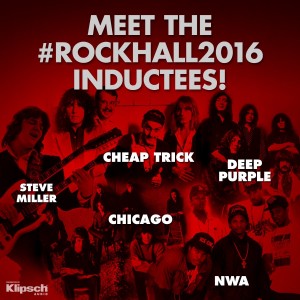 According to the Rock & Roll Hall of Fame’s official website:

To be eligible for induction as an artist (as a performer, composer, or musician) into the Rock and Roll Hall of Fame, the artist must have released a record, in the generally accepted sense of that phrase, at least 25 years prior to the year of induction; and have demonstrated unquestionable musical excellence.

We shall consider factors such as an artist’s musical influence on other artists, length and depth of career and the body of work, innovation and superiority in style and technique, but musical excellence shall be the essential qualification of induction.

This year only five artists/bands out of the 15 nominees were chosen to be inducted. Here is the official rock and roll class of 2016:

Cheap Trick – Eligible since 2002, Cheap Trick is led by Rick Nielsen’s unmistakable five-neck guitar sound and the vocal prowess of Robin Zander. Released between 1977 and 1980, their first five albums – Cheap Trick, In Color, Heaven Tonight, Dream Police, and All Shook Up – made an impressive impact on the punk rock scene. My favorite songs: “I Want You To Want Me,” “Surrender,” and “California Man.”

Chicago – Although Chicago is not a band I’ve spent time listening to, the band gained popularity in the 1970s and 1980s and garnered attention with jazz-rock songs like “Make Me Smile,” “Saturday In The Park,” and “25 Or 6 To 4.” Second only to The Beach Boys in Billboard singles and albums chart success among American bands, Chicago is one of the longest-running and most successful rock groups and has sold over 40 million units in the U.S.

Deep Purple – While there is always talk about why it’s taken the Hall of Fame so long to induct a certain band or artist, when it comes to Deep Purple those conversations are totally valid. It’s been 68 years (yes, you read that right) since the release of their debut album Shades of Deep Purple which includes two of my favorite songs – “Hush” and “Hey Joe.” Even though the most popular version of the latter is Jimi Hendrix’s version, Deep Purple originally wrote “Hey Joe” and the band considered one of the heavy metal greats.

N.W.A. – It’s always exciting when groups get inducted within a few years of eligibility and N.W.A. has done just that. It only took the “Straight Outta Compton” kids three tries which is quite a feat considering they only released two albums in their short career. But that’s a testament to their longevity and influence on music. Although the haters will say that N.W.A. is hip-hop and not rock and roll and will point that their induction is happening on the heels of the popular movie released this summer, I’m glad N.W.A. has been chosen.

Steve Miller – This one is way overdue! Since the 1960s, Steve Miller has made music that has lasted through the generations. Hits including “Take The Money And Run,” “Rock’n Me,” “Fly Like An Eagle,” and “Jungle Love,” are so ubiquitous that I bet you, your mother, and your kids know every word to every song.

Congratulations to this year’s inductees! Here are the nominees who will have to wait until next year: