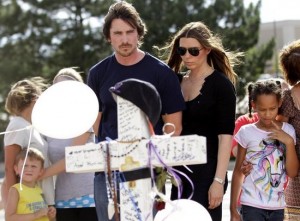 Maybe the Mayans were partially right – clearly the world isn’t coming to an end in 2012 but there sure is a lot of craziness going on:

Aurora Shooting: 12 people killed and over 50 injured in a mass shooting during a midnight screening of The Dark Knight Rises. So sad and tragic it’s almost too much to think about. One small but important silver lining was Christian Bale visiting – impressed and glad he was there.

Apparently Chick-fil-A Is Anti-Gay: Chick-fil-A President Dan Cathy thinks he can publically denounce anti-gay marriage without any retaliation? Yeah right. Two mayors of major cities – Chicago and Boston – are doing everything in their power to keep the food chain from expanding into their respective neighborhoods. Thanks for playing Cathy.

Penn State Gets Schooled: Following the Joe Paterno/Jerry Sandusky scandal it’s no surprise that Penn State is suffering some serious repercussions but I don’t think anyone expected a $60 million fine, a four-year ban from postseason play and a cut in the number of football scholarships the university can offer. I’m sure people also didn’t expect the NCAA to erase 14 years of victories, wiping out 111 of Paterno’s wins and stripping him of his standing as the most successful coach in the history of big-time college football. Although I feel for the players and those who worked hard for those wins and had nothing to do with the scandal, it’s hard to feel bad those who were part of the scandal. As far as I’m concerned this particular punishment is what you get when young kids are getting molested and you look the other way.

Really? Justin Bieber Is Too Loud?: Although I think Bieber is one of the most overrated singers out there he doesn’t deserve to get sued for $9.2 million by a nutjob mother who is trying to collect for some bullshit hearing loss allegation. Said mother Stacey Wilson filed suit in U.S. District Court in Oregon claiming she suffered severe hearing damage at a Bieber concert two years ago when sounds exceeded safe decibel levels. Get a grip lady – if you decide to attend a teen heartthrob show with a bunch of screaming girls in attendance bring some ear plugs.

Twitter Will Get You Banned: Greek triple jumper Paraskevi “Voula” Papachristou was expelled from her country’s Olympic team for a Tweet perceived as racist. 23-year-old Papachristou was getting ready to head to London for her first Olympic Games when she posted a “joke” to her Twitter feed about the West Nile virus that appeared to mock Greece’s African immigrant population:

“With so many Africans in Greece, at least the mosquitoes of West Nile will eat homemade food!!!” she tweeted Sunday.

What the hell was she thinking? How could that not be seen as racist???

At first Papachristou tried to defend herself but then ended up apologizing – but it wasn’t enough. The Hellenic Delegations’ Administration Board decided to remove her from the team, citing “comments that go against the values and ideals of Olympism.”

What’s going to happen next? Five more months left in 2012…