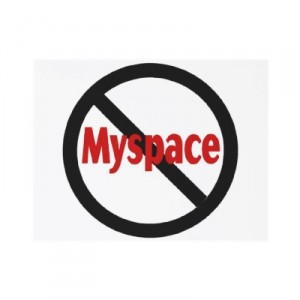 Remember back in the day when people cared about MySpace?  Apparently no one does anymore since News Corp. sold it for a mere $35 million today.

Although $35 million sounds like a lot of money it’s nothing compared to MySpace’s purchase price tag.  Back in 2005 News Corp. bought the social networking site for $580 million but now that it’s 2011 and everyone is on Facebook and/or Twitter, MySpace seems like the Stone Age version of social networking.

So why did MySpace rise so fast and fall so hard?  In my opinion, MySpace was never very user- friendly.  It was, however, the first site of its kind to allow photos – a trend that Facebook wisely followed soon after.  MySpace also gave the option to have songs on your page and your own layout which made sense considering the original point of the site was to give local artists and bands an opportunity to get their music out to the masses.  What a brilliant idea!

As a result, people started migrating over to the much more user-friendly Facebook and the rest is history.  Everyone on the planet has a Facebook page – even my mother!  Although I’m not on Twitter it is an extremely popular site, especially if you’re interested in celebrity gossip.

Either way, the MySpace age is over and now not only does every person have a Facebook page, every business does as well.  It has become a site that is imperative to legitimizing your company.  It’s even gotten to the point where not having a Facebook page is almost like saying you don’t have an email address.  It’s unheard of and makes you look like you’re unbelievably out of touch.