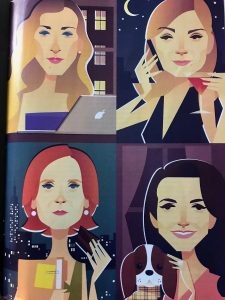 It’s been two decades since Sex and the City premiered on HBO. Two decades. Yeah, I can’t believe it either. A little pop culture perspective: In 1998 Google was founded, Armageddon was in movie theaters, TRL launched, Seinfeld signed off (more on that later), and the first portable MP3 player was released. Time flies y’all.

Although SATC ended in 2004 (14 years ago!) and spawned two movies (in 2008 and 2010), the show is still relevant today – especially in our current social/political climate that is highlighting females. It should also be noted how decorated the series is: it won seven of its 54 Emmy Award nominations, eight of its 24 Golden Globe Award nominations, and three of its 11 Screen Actors Guild Award nominations.

I don’t subscribe to HBO anymore but SATC lives on thanks to reruns on the E! channel. All these years later it’s still fun to tune in. While some of the aspects of the show, especially the early seasons, are a bit dated (i.e. Miranda’s PalmPilot, everyone’s answering machines, and Carrie using AOL), the clever writing, the actresses’ comedic timing, and the overall themes of the show remain extremely pertinent.

In fact, in a lot of ways, SATC represents “the good old days” of television when Donald Trump was just a rich guy with a tower in New York City and people snapped their flip phones shut to emphasize their point. Looking back it really is amazing how the subject matter of the four ladies’ conversations were breaking ceilings way before #metoo and #timesup were part of our everyday lexicon. So it makes sense that, in addition to coinciding with the show’s 20thanniversary, a book about its cultural significance is being released next month.

Written by former Entertainment Weekly writer Jennifer Keishin Armstrong, Sex and the City and Us: How Four Single Women Changed the Way We Think, Live, and Love will hit the stands (and by that, I mean it will be available via Amazon) on June 4. Armstrong is no stranger to writing about pop culture – her bestselling book Seinfeldia: How a Show About Nothing Changed Everything explores the impact of the groundbreaking comedy that ended the same year SATC began. That in and of itself is interesting but what’s also interesting is that SATC, which was based on Candace Bushnell’s newspaper columns, is coming full circle and back to print.

Of course, it makes sense that my recent issue of Entertainment Weekly featured an excerpt from Armstrong’s SATC book – former publications should always support their own – and I’m happy to report that the excerpt has already provided new and captivating information. It talks about how creator Darren Star and executive producer Michael Patrick King found their leading ladies which is fascinating – especially since all four of them had initial reservations about the show.

As someone who loves background stories about how all things pop culture come to fruition – bands, books, television shows, tours, movies – this book is right up my alley. So much in fact that I did something I’ve never done before – I pre-ordered it. I have a feeling that once people hear about it there will be a waiting list and I’m too curious to wait.