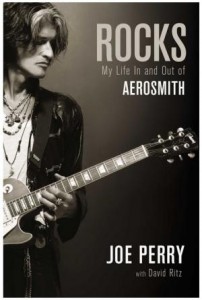 Even though I’m a huge Aerosmith fan, when I first saw Joe Perry’s Rocks on the shelf at my local bookstore I wasn’t sure that it was going to be worth reading. I had already read Steven Tyler’s Does The Noise In My Head Bother You? and thought that maybe I knew everything I needed to know. So I left it on the shelf. A few days later I thought about how just reading Tyler’s book might mean that I was only getting half the story and I thought that since both books were New York Times bestsellers I would give it a try. I’m so glad I did. The book was insightful, introspective, well-written, and gave readers all the juicy details. As promised, it also encompassed Perry’s entire life both in and out of Aerosmith which I appreciated because the stories of his background and family both humanized him and clarified how he became who he is today.

Here are 15 things I learned from the incomparable Joe Perry:

-His first guitar came with an instruction manual that directed him to put the neck in his left hand and the pick in his right so he followed the right-handed instructions even though he’s left-handed. Who knows what kind of guitarist he would be if he learned to play lefty.

-Because Steven Tyler was constantly throwing around his microphone while performing, the crew started tying strips of cloth around its stand to hold it together. He initially added the scarves because it gave him something to hide behind in front of large audiences, but the flair would soon become a signature part of his stage design.

-The name Aerosmith comes from Sinclair Lewis’s 1925 novel Arrowsmith. Although it won the 1926 Pulitzer Prize, Lewis refused to accept it. Arrowsmith is arguably the earliest major novel to deal with the culture of science as it was written after the improvements of medical education came about. The novel revolves around the main character, Martin Arrowsmith, who travels from a small town in the Midwest to the upper ranks of the scientific community.

-In 1972 Aerosmith made their very first record which includes two of my favorite songs: “Dream On” and “Mama Kin.”

-In October 1977 Aerosmith was scheduled to board a small plane called a Convair until their friend’s father (an Air Force pilot) checked it out and demanded that the band refuse to board. They complied. Unfortunately, Lynyrd Skynyrd didn’t have the same competent people on their payroll and one week later the same Convair crashed with Lynyrd Skynyrd on it.

-AC/DC, the New York Dolls, and Cheap Trick are some of Joe Perry’s favorite bands of all time.

-Rock in a Hard Place is the only Aerosmith album that does not feature Perry in any capacity.

-It was producer Rick Rubin’s idea to have Run-DMC rap on “Walk This Way” and in 1986 he brought the two groups together. During the recording session Rubin decided that he wanted to include a new bass part. When Perry said he didn’t bring a bass guitar, a kid who had been watching the session said he would find one. That kid was one of the members of the Beastie Boys.

-Three young (at the time) bands that opened for Aerosmith over the years were Guns N’ Roses, The Black Crowes, and Skid Row.

-In 1995 Perry inducted Led Zeppelin into the Rock and Roll Hall of Fame.

-Because “I Don’t Want to Miss a Thing” was written for the movie Armageddon, it was eligible for an Academy Award. Although the song didn’t win, it was the band’s first number one hit. Additionally, it debuted at number one on the Billboard Hot 100.

-Joe Perry is the only person, who is not a member of Kiss, to ever play live with the band.

-According to Perry, Guitar Hero had the same impact on the band’s career as having a hit album. The band’s involvement with Guitar Hero became a 2009 summer tour with ZZ Top and I was lucky enough to see them at Fiddler’s Green in Denver!

-The documentary Rock for the Rising Sun features an interview with an avid Japanese Aerosmith fan who offered the band $300,000 to play five songs he had never heard live. Although the band honored his request, the money was donated to the Japanese Red Cross tsunami relief fund.