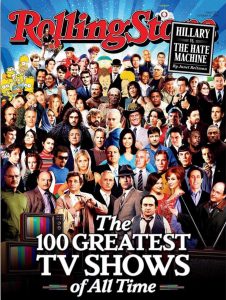 I love lists. There is no question about that. But Rolling Stone’s latest list of the “100 Greatest TV Shows of All Time” exemplifies the problem with lists that are too broad. While I’ve always been a fan of the magazine (my subscription dates back to 1996), it has become notorious for lists that are too large – i.e. 2003’s “500 Greatest Albums of All Time “list. Seriously? At that point what really separates number 179 from number 156 or number 83 from 72?

The bottom line is that lists of this caliber need to be divided into some kind of system that breaks down into smaller categories, whether it’s by decade or genre, so the magnitude of it isn’t so overwhelming and the choices actually mean something.

In terms of this particular list, I found that the number of talk shows mentioned extremely odd since interviewing actors and actually acting aren’t exactly the same skill set. I get that those shows changed/elevated/enhanced television (I’m a huge fan of The Tonight Show Starring Jimmy Fallon), but it’s kind of unfair to compare The Tonight Show With Johnny Carson (30) with Friends (26). But that’s not the only issue. Where are all the premium cable shows on this list? Yes, The Sopranos, The Wire, and Veep were mentioned within the top 25, but does Sex and the City really belong at number 62? And what about Californication? Did it seriously not even make the list? Both of the shows earned numerous Emmy and Golden Globe nominations so why aren’t they at least part of the top 40?

Also, should game shows be part of this list? Jeopardy clocks in at number 94 but there is no Wheel of Fortune? I enjoy both of the shows and they’ve been on since 1964 and 1975, respectively. And then “reality” shows are allowed as well? American Idol at number 92 but The Voice is nowhere to be found? I guess that’s because, even thought I like the format of the latter much better, the former launched the careers of two award-winning artists in Carrie Underwood and Kelly Clarkson. But if that’s the case where is American Bandstand? And the mother of all reality shows, The Real World, is listed at 85, but where is Survivor? That show has been on for 33 seasons!

Although I enjoyed American Crime Story: The People vs. O.J. Simpson, it was a 10-part miniseries that lasted just over two months. And Roots, as game-changing as it was, only lasted eight episodes. Is it fair for all these genres to be judged under one large umbrella?

While The Sopranos at number one wasn’t surprising, The Wire and Breaking Bad at numbers two and three were kind of copout choices because they are shows that have similar themes about damaged characters who find themselves in corrupt situations that involve even more damaged characters. I never got into The Wire or Breaking Bad but, from what I’ve read and been told, they were television game-changers. Fair enough – I just wish the top ten had more variety.

Speaking of classic shows, I was looking for M*A*S*H and Cheers in the top ten but they barely made the top 20, at 16 and 20, respectively. I couldn’t believe SNL, The Daily Show, and Late Night With David Letterman, which all landed in the top 20, are part of this list because I feel like those shows should have their own category. They are skit and talk shows, not scripted drama or comedy. It was definitely fun seeing Freaks and Geeks at number 11 (even though it lasted one season) and The West Wing at 15. On another note, I’m surprised Lost was at 39 – seems like that show should have (and would have) made the top 25 if talk shows weren’t allowed. Loved seeing My So-Called Life at 35 (also only one season), and South Park at 36 (showing that they will never really be able to compete with The Simpsons).

Hopefully in the future Rolling Stone will focus more on quality and thoughtfulness than quantity and shock value with their numbers. Television has always and will always be part of the pop culture lexicon so lets make these lists a little bit more quantitative and interesting to read.