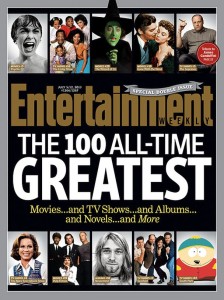 It’s no secret that I love lists. I love reading lists, making lists, crossing things off lists. I also enjoy critiquing lists put together by my favorite magazines and Entertainment Weekly recently released the mother of all lists: The 100 All-Time Greatest movies, TV shows and music. But I’m only going to talk about five in each category. Here we go…

2) The Godfather – Without a doubt this is the original gangster movie that clearly prompted subsequent mob movies and shows (The Sopranos being the most obvious) because it seamlessly connected two major themes: the consequences of crime and the importance of family.

19) Pulp Fiction – I can’t even imagine how Quentin Tarantino explained the premise of this movie to the powers that be back in 1994. A million different storylines that feature guns, drugs and dancing but it’s ok because it stars big names like John Travolta, Samuel L. Jackson, Uma Thurman and Bruce Willis. Oh, and a wallet that says “Bad Motherfucker.” Pure insanity and pure genius.

52) Titanic – You know the movie is a winner when it’s a love story that keeps you on the edge of your seat even though you know the outcome. Our generation’s classic movie for sure.

67) Rebel Without a Cause – How many characters were written based on James Dean’s outcast with slick hair, a leather jack and a bitching motorcycle? Face it – we wouldn’t have Dylan McKay without the influence of Jim Stark.

80) Dazed and Confused – So many quotes came from this movie that, although released in 1993, portrays the 70s without missing a hippie beat. With a cast that includes Matthew McConaughey, Ben Affleck and Parker Posey, among many others, Dazed is a high school movie that stays the same age.

3) Seinfeld – Notoriously touted as the “show about nothing,” Seinfeld broke the mold because the characters had no shame, were obnoxiously clever, weren’t afraid to offend and had unparalleled comedic timing.

22) My So-Called Life – There’s a reason why this show only lasted one season. Never has high school been depicted in such a real, raw way. Instead of dispensable income and designer clothes we were given a front row seat to middle class kids going to public school and dealing with real issues and talking like real people.

24) Lost – This was more than a show about a plane crash, interconnected storylines, flashbacks that broke and then remade the rules and endless questions. Never has a show ever rocked TV in such a way and who knows if another ever will.

58) Sex and the City – Although no one can actually afford that kind of designer apparel, that many cocktails and going out to dinner every night in New York City, this show reminds us that friends can be the best family in the world.

75) Beverly Hills, 90210 – One could argue that this show is the antithesis of My So-Called Life but it can you can’t deny how iconic it became. While the best years of the show were the ones spent at West Beverly High, 90210 was on television for a decade solidifying itself as more than just a show about high school.

4) Thriller – No wonder it’s the best-selling album of all time: “Wanna Be Startin’ Somethin’,” “Beat It,” “Billie Jean” and obviously the title track are still get-up-and-dance songs over 30 years later. Thank you Michael Jackson for being such a creative force and for changing the game forever.

10) Nevermind – Three punk kids destroyed guitars, screwed with the glam metal era, invented a new genre and made it mainstream. And they had the balls to put a naked baby boy on the cover of the album. 22 years later the first three chords of “Smells Like Teen Spirit” still gives me chills.

26) Are You Experienced? – Jimi Hendrix is without a doubt one of the greatest guitarists of all time but this album showcases that he can also sing, write music and bring an audience to their knees. In case you forgot that all these hits came from one disc: “Purple Haze,” “Manic Depression,” “Hey Joe,” “Fire,” “Foxey Lady” and once again, the title track.