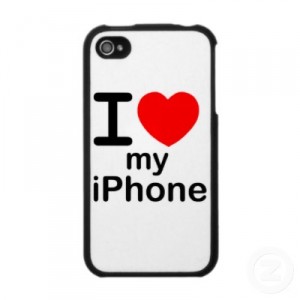 That is what my cousin Marshall said to me when I told him that I finally purchased an iPhone yesterday.  After much conversation that began in February about how my phone was from the 90s I finally made the big switch to a Smartphone and I’m very glad I did.  These phones are amazing – they are like little handheld computers that also function as a phone.  I know everyone else in America has either a Blackberry or an iPhone and already knows this but I’m excited about my new toy and I’m going to tell you why.

Obviously Smartphones have that name for a reason – their capabilities are seemingly endless as you can pretty much run the world from your phone.  Email, Facebook, Google – if you want to look someone or something up you can do it in less than 30 seconds.  Also, if you are in an unfamiliar city and are looking for the closest Italian restaurant or need directions to the ballpark your phone can help.  It saves time, money and a lot of aggravation.

Speaking of aggravation – in the last six months I’ve noticed that not having a Smartphone was becoming increasingly limiting due to the fact that it wouldn’t let me store more than 50 photos on the phone, I couldn’t read a text while talking on the phone and I sure as hell couldn’t surf the Internet to look something up.  If I saw a funny bumper sticker, sign or license plate I couldn’t share it.  But now everything has changed and I haven’t had the phone 24 hours yet.  I’m able to multi-communicate and if there is something I want my friends and family to see I can make it happen by pressing a few buttons.

In addition to the cool features I’ve already explored I’m looking forward to using my iPhone at upcoming concerts as I’ve heard that it will probably take better photos than my digital point-and-shoot I carry in my purse.  I’m also looking forward to the music side of this phone – I haven’t transferred any music from my iTunes account yet but I will try it tonight!

So the bottom line is that what everyone says is true: “Getting an iPhone will change your life and you will never go back.”  Thank you to Marshall Spooner, Justin Reed, Dave Mescon and the rest of the geeky tech guys in my life for giving me such a hard time and forcing me via peer pressure to buy this phone. And a big thank you to my mother for being so generous with her upgrades. It’s all happening.