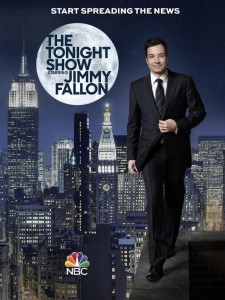 Those words were recently uttered by my good friend and fellow pop culture enthusiast Steph Peterman when we were talking about the Full House skit Fallon recently did on his show. We had this conversation a few weeks ago but her words stuck with me because she totally nailed it. Besides being a triple threat – actor, comedian, musician – Jimmy Fallon is someone you want to hang out with. In fact when you watch him on TV you feel like you’ve already hung out with him.

Because despite being incredibly talented, Fallon exudes a friendliness and genuine excitement for what he does. His enthusiasm is palpable and irresistible – you can’t help but be as stoked as he is about whatever he is doing or talking about at the moment.

I’ve written about Fallon before but it was mostly about his flawless collaborations with his equally talented buddy Justin Timberlake. Whether they are on Fallon’s show or on SNL or performing the History of Rap Part 72, they are entertaining, clever and incredibly funny. And as fantastic as Timberlake is, I think Fallon really does bring out the awesome in everyone he encounters and that might just be the best characteristic a person could ever have.

On Monday, February 17, Fallon will make his next and arguably most significant career move. He will replace Jay Leno as host of The Tonight Show. Fallon currently hosts Late Night with Jimmy Fallon which is very popular and features The Roots as the house band. As fun as his current show is, getting The Tonight Show is a big deal. Why? It has been on NBC since 1954 and is the longest currently-running, regularly-scheduled entertainment program in the United States.

Before Leno, Johnny Carson, who was one of the most famous faces in television history, hosted for 30 years. During his career, Carson received six Emmy Awards, the Governor’s Award and a 1985 Peabody Award. He was also inducted into the Television Academy Hall of Fame in 1987, was awarded the Presidential Medal of Freedom in 1992 and received a Kennedy Center Honor in 1993. Although I’m not a big Leno fan, he hosted The Tonight Show for 21 years which is worth recognizing.

So clearly, Fallon is stepping into some big shoes and into a big legacy. I know he’ll do a great job because he did a great job on Late Night with Jimmy Fallon. I’m excited for him and all the creativity he’ll bring to the show. Cheers to you Jimmy – I can’t wait to see which musician you impersonate next!