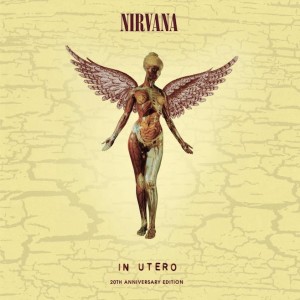 On September 24 Nirvana will be releasing a new album – well actually it’s a re-mastered version of their third and final studio album In Utero. Actually it’s a four-disc package that celebrates the 20th anniversary of the album’s release. Does that sound complicated? Isn’t it always with Nirvana?

Before I get into the upcoming release, here is a little background on the original:

Released on September 13, 1993, In Utero was meant to diverge significantly from the polished production of Nevermind (1991). To capture a more abrasive and natural sound, the group hired producer Steve Albini to record In Utero during a two-week period in February 1993. The music was recorded quickly with few studio embellishments.

Soon after recording was completed, rumors circulated in the press that the record label might not release the album in its original state because it felt the result was not commercially viable. Although Nirvana publicly denied the statements, the group was not fully satisfied with the sound Albini had captured. Since Albini declined to alter the album, the band hired Scott Litt to make minor changes to the album’s sound and remix the singles “Heart-Shaped Box” and “All Apologies.”

In Utero entered the Billboard 200 chart at number one and received critical acclaim for exactly what the band was looking for – a drastic departure from Nevermind. The record has been certified five times platinum by the Recording Industry Association of America and has sold over 3 million copies in the United States.

Now on to the “new” release:

The 20th Anniversary reissue of In Utero is a 70-song, three-disc deluxe edition that will contain: Two versions of In Utero (the original LP re-mastered, plus the album newly remixed), more than 40 tracks of unreleased demos, rehearsals, live performances, B-sides and a recently unearthed, never-before-heard Nirvana instrumental. Wow that’s a mouthful!

For the Nirvana diehards, this new release is like Christmas in September because it includes so many details, versions of songs, hand written letters, etc. For the average Nirvana fans out there it might be a little much since not everyone is interested in several versions of the same songs.

Of course the unreleased material is very cool and something different so it will be interesting to see what people are willing to pay for and if the DVD footage is enough to seal the deal:

Like the Nevermind 20th Anniversary reissue, this edition of In Utero will be available in various formats including CD/DVD, vinyl and digital. The reissue will also include Cobain’s handwritten lyrics, a four-page letter Albini wrote the band prior to recording which details his plans for the album, plus liner notes written by comedian and occasional tour opening act Bobcat Goldthwait.